Mahatma Gandhi would be the first Indian to honoured with Congressional Gold Medal. The Congressional Gold  Medal is the highest civilian award with in the  US.  This award is given by United States Congress.  The award was honoured to him for the popularity of his promotion of peace and nonviolence.  Gandhi's Satyagraha  movement of nonviolent  resistance (NVR) impressed a nation everywhere around the globe.  Congresswoman Carolyn B Maloney said, “his motive  rouse ourselves to serve others”. 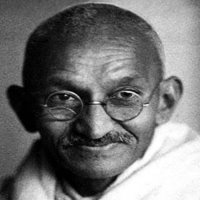