Ø  On October 4, dozens of individuals participating in a mountaineering course were hit by an avalanche on Draupadi Ka Danda-II peak in Uttarakhand.

Ø  Totally were 16 individuals, including 2 instructors and 14 trainees have lost their life to the avalanche while taking part in a training course conducted by Nehru Institute of Mountaineering. 15 more people are currently missing.

Ø  Among the casualties is 26-year-old Savita Kanswal, who became the first Indian woman to climb Mount Everest and Mount Makalu in just 16 days.

Ø  The rescue operations are currently being conducted by State Disaster Response Force-(SDRF), Indo-Tibetan Border Police-(ITBP), A  14-member team from High Altitude Warfare School based in Jammu and Kashmir’s Gulmarg as well as mountaineers from the Nehru Institute of Mountaineering (NIM).

Ø  The avalanche had hit the Draupadi Ka Danda II peak in Uttarakshi district at an altitude of 17,000 feet.

Ø  This catastrophic avalanche may have been caused because of a 2.5 magnitude earthquake that hit the Uttarakshi district on October 2.

Ø  The epicentre of this earthquake was at Nald village in Uttarakshi district’s Bhatwari tehsil.

Draupadi ka Danda (Draupadi’s Hill) are two peaks in the Gangotri range of Garhwal Himalayas. These two peaks are situated in the Indian state of Uttarakhand. Dokriani glacier is situated at the northern slope of the mountain. The height of the peaks is unknown. These  two peaks are named after Draupadi – a character from the Hindu epic Mahabharata. The peak is believed to be the place from which the Pandavas ascended the heaven. This mountain holds religious significance for villagers in Bhatwari. It is being worshipped by conducting pujas on the banks of Kheda tal, a lake situated at the foothills of the peaks.

For further details, read our couse pages to understand well about the exam.

Get selected in Top Banks in india. 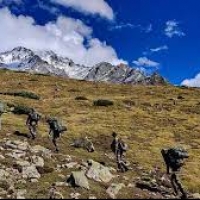