During his ongoing visit to Himalayan nation, Indian Army Chief General Pande was conferred with Honorary General of Nepalese Army.

At Sheetal Niwas in Nepal’s capital Kathmandu, which was the official residence of the President, Indian Army Chief General was conferred with the title “Honorary General of Nepal”.

Honorary title – shared among the countries:

In 1950, Commander-in-Chief General KM Cariappa was the first Indian Army Chief to be awarded with this title.

This was a seven-decade-old traditional practice of decorating each other’s country army with Honorary title.

It was his first visit to Nepal as Chief Army staff which was a four-day official visit from 5th to 8th of this month.

General Manoj Pande on behalf of Indian Government, provided training equipment to Nepalese Army along with light vehicles which would enhance the Nepalese Army Personnel capabilities.

He was an alumnus of the IMA – Indian Military Academy, Dehradun and NDA – National Defence Academy, Khadakwasla.

He was commissioned into the Bombay Sappers in 1982,  after passing out from the IMA.

He had held prestigious command and staff assignments in all types of terrain during his 39-year military career in counter-insurgency and conventional operations. He had commanded an engineer brigade in the Western theatre. He had also commanded an infantry brigade along the Line of Control (LoC), in the Ladakh sector and a corps in the North-east region of the country.

He had also served as the Eastern Army Commander, before taking over as the army’s vice-chief. From June 2020 to May 2021, he had served as the Andaman and Nicobar Command’s commander-in-chief. He would be the senior-most officer of the Army after General Narvane retires.

For further details, read our course pages to understand well about the exam.

Get selected in Top Banks in India. 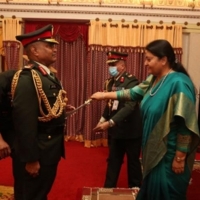