Neeraj Chopra, Olympic Champion and Javelin thrower had made a history by becoming the first Indian to clinch a Lausanne Diamond League.

Chopra, a 24-years old,  who was pulled out of the Birmingham Commonwealth games due to minor injury that he had suffered during championship last month was the First Indian and the youngest from Haryana to be qualified for the Diamond league finals which is going to be conducted on September 7 and 8 in Zurich.

He had also created another history for India during the month of July, 2022 by becoming the only second Indian and First male track and field athlete to win a silver medal in the World Championships in the Javelin Throw.

Key Points to be noted:

At first throw he hurdled the spear with 89.08m, which was his carrer- best effort and 85.15m at second throw, Neeraj Chopra has made an history by becoming the first Indian to clinch a Lausanne Diamond League. However, he made a fowl throw at his fourth attempt. At his Fifth attempt he again made an history and his sixth attempt with 84.04m. Meanwhile, Jakub Vadlejch, who is a Tokyo Olympics silver medalist had finished the match second with 85.88m and Curtis Thompson USA, with 83.72m was third to finish the match. 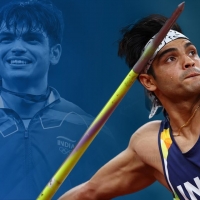