Mrs.Nallathambi Kalaiselvi has been appointed as a Director General of CSIR (Council of Scientific and Industrial Research) for next two years and she is appointed as a senior electrochemical scientist.

CSIR was founded on September 1942 as an autonomous body. The CSIR is the largest Research and Development organisation in India and it was founded by Ministry of Science & Technology.

Mrs. Kalaiselvi is also famous for her lithium-ion-batteries work.

She is currently working on the office of the director of CSIR-Central Electrochemical Research Institute in Tamil Nadu.

Mrs.Kalaiselvi is currently holding the position for director of CSIR (Council of Scientific and Industrial Research)

Mrs.Kaliselvi she also hold the charge of secretary to the Department of Scientific & Industrial Research.

Mrs.Kalaiselvi, she is currently doing the development and practical process on Sodium-ion or Lithium-sulphur batteries and super capacitors.

Mrs.Kalaiselvi as of now, she did published morethan 125 research papers and she holding 6 patents too. 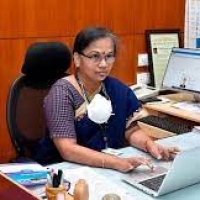