Pakistan pulled out from Chess Olympiad 2022

The 44th Chess Olympiad organised by the Federation Internationale des Echecs(FIDE) designed to held at Chennai, India from 28 July to 10 August 2022.  This is the first ever international competition to be  host by Chennai.  Pakistan announced that they are going to withdraw from the competition because of India’s torch that passed through Kashmir on 1st of July.  Pakistan accused of India that “India chose to politicize this prestigious international sporting event” said by Asim Iftikhar, Pakistan’s foreign office spokesman, amalgamating sports and politics. But India bangs Pakistan by telling that Jamu and Kashmir will be the integral part of India and Pakistan is the one politicizing the entire issue.  Pakistan was invited by FIDE to take part in the 44th Chess Olympiad ,but unfortunately Pakistan

declared not to participate and told that it will be a kind of showing protest against India over cross-border tension and raise this matter with the federation. 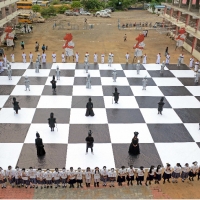