NITI AAYOG RELEASED THE FOURTH EDITION OF HEALTH INDEX FOR2019-20

NITI AAYOG  RELEASED THE FOURTH EDITION OF HEALTH  INDEX FOR2019-20

Its named as” HEALTHY STATES AND PROGRESSIVE INDIA” ranks states and Union Territories on their year-on-year incremental performance in health outcomes as well as their overall status.

Its being complied and published since 2017

By this reports of index  nudge states/UTs towards building robust health systems and improving service delivery.

In termes of annual incremental performance among the larger states uttar Pradesh ,assam and Telangana are top three ranking states

The best incremental performance shown by Delhi, followed by Jammu and Kashmir  among  UTs,

Read our daily current affairs in TAMIL & ENGLISH for your preparation to become successful in the upcoming Government Examinations. 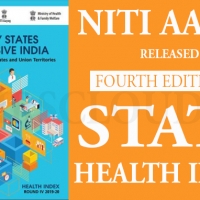