Supreme court allowed women to appear for NDA exam which is scheduled on September 5.  The supreme court said that the decision is based on “gender discrimination”. According to the petitioner, the eligible female candidates  can’t be able to join  National Defence Academy on the basis of  gender. This Petition  point up  the issue of violation of Articles 14, 15, 16 and 19 of the Constitution. The written examination for joining this academy  will have  two subjects 1) Mathematics and  2) General Ability Test. The timing for the examination  will be of two and half hours 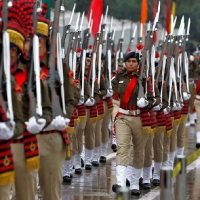