Yesterday Arogya Van, Arogya Kutir,  Ekta Mall and Children Nutrition Park was inaugurated at Kevadia in Gujrat by our honourable Prime Minister Shri Narendra Modi .   The Prime Minister has been busy inaugurating several initiatives and projects to contribute to the integral development of Gujarat. As a result of this, Shri Narendra Modi has inaugurated the Arogya Van, Arogya Kutir along with the inauguartion of Ekta Mall and Children Nutrition Park.

Arogya Van has a special connect to nature as it contains an area of 17 acres of land with about 5 lakh of plants belonging to different species. It is believed that around 380 species of plants are there in Arogya Van.  Arogya Kutir is a wellness centre which provides healthcare based on traditional treatments using Ayurveda and Siddha medicines and by practicising Yoga and Panchakarma.

Ekta Mal,l on the other hand, is a mall with variety of art and handicraft items which are traditional made from across india. These handicrafts symbolise our nation’s policy unity in diversity. The mall is spread over 35000 sq ft consisting of 20 Emporia. Those emporiums are built in 110 days and each one  representing a state in India.

Children Nutrition Park & Mirror Maze is the first of its kind in the world to make use of technology over an area of 35000 sq ft. ‘Phalshaka Griham’, ‘Payonagari’, ‘Annapoorna’, ‘Poshan Puran’, and ‘Swastha Bharatam’ are some of the fascinating theme based stations in the park. The aim is to create awareness of the nutritional values among children. 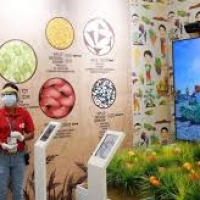