The trophy is presented every year after assessing the accident and incident records of each unit. This year the award was presented to 663 Army Aviation Squadron which is a unit of Jammu & Kashmir territory. It is reported that Squadron is considerably one of the oldest Squadrons of Army Aviation.  Gen MM Naravane presented the COAS, who is the Chief of Army Staff to Subedar Major, Commanding Officer on the final day of the Conference of Army Commanders. 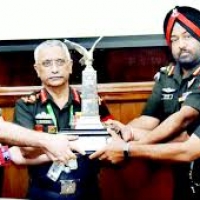