The ASEAN-India Economic Ministers Consultations was held via video conferencing(virtually). India was represented by the Union Minister of Commerce and the Industry Shri Piyush Goyal respectively.

The meeting was attended by the commerce ministers of the ten ASEAN countries. This includes Malaysia, Thailand, Laos, Vietnam, Indonesia, Singapore, Brunei, Myanmar, Cambodia and Philippines. The leaders at the meet reaffirmed their commitment in the following manner

The ASEAN-India Business Council report was submitted in the meeting. The report had recommended in order to review the AITIGA. AITIGA is specified in ASEAN India Trade in Goods Agreement.

The AITIGA is a free trade agreement between the ten ASEAN members and India. It was signed in the year 2010. According to the agreement, the partners have set a timeline to eliminate duties on as much goods as possible.

Why is the review needed?

·        The main reason for the growing trade deficit is because of the low utilization of the FTA route by the Indian traders. 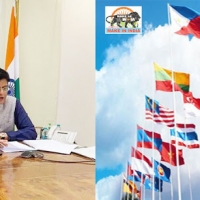