The Export Preparedness Index 2020 is the report prepared with Niti Aayog indicating the presence of strong enabling and facilitating factors to promote exports. In which Gujarat has become top followed by Maharastra and Tamil Nadu in the second and third places respectively.

In the Himalayan region, Uttarakhand topped in the list followed by Tripura and Himachal Pradesh.

In the Union Territories, Delhi has performed well followed by Goa and Chandigarh.

The landlocked states of Chhatisgarh and Jharkhand took several measures that had initiated to promote exports.

Niti Aayog Vice-Chairman Rajiv Kumar said exports are an integral part of Aatmanirbhar Bharat and the country will have to keep striving to increase the share of exports in GDP and world trade.

The Chief Executive Officer of Niti Aayog, Amitabh Kant said the rapid growth of exports is a crucial component for long-term economic growth.

However, Amid ongoing COVID-19 crisis dealt a major blow to the current fiscal.

Niti Aayog in partnership with the Institute of Competitiveness released the first Export Preparedness Index (EPI) 2020.

The Export Preparedness Index will rank the states with some key parameters such as business environment, infrastructure, transport connectivity, access to finance, export infrastructure, and trade support. 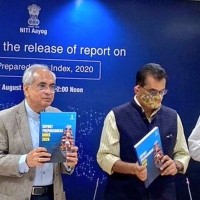