In this meeting, both sides have discussed bilateral economic and trade cooperation, including the status of negotiations for concluding a bilateral investment treaty, trade agreement, mutual market access for agricultural produce of both countries.

Both countries have bilateral trade turnover of more than 300 million dollar.

Indian has made notable investments in Uzbekistan have been made by Indian companies in the fields of pharmaceuticals, amusement parks, automobile components, and hospitality industry. 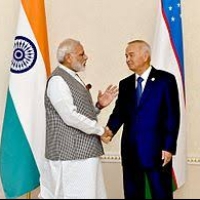