Migrant workers will soon get transit homes by Karnataka Government

Migrant workers will soon get transit homes by Karnataka Government

The Karnataka Chief Minister is planning to build a transit home for migrant workers due to reverse migration occurred in Karnataka during the nationwide lockdown.

The Karnataka government is aiming to provide better living conditions for migrant workers. Each transit home will consist of capacities of at least 3000 workers. These homes will have kitchens for workers to cook their meals.

The project has been initiated under the “Apna Ghar” Project.  Labour Minister Shivaram Hebbar, while confirming the development to ET, said the government has identified 20 acres in Yelahanka where the first such complex will come up.

The expected cost of this project is Rs 50 crores and the scheme requires a nominal fee from migrants for their stay, once the transit homes are constructed for the migrants in the state. 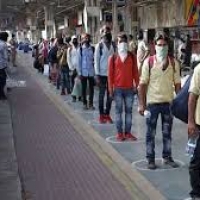