India’s first social media super application Elyments launched by the Vice President Venkiah Naidu through video conferencing, this app contains multiple features in one place as this allows the users to stay in touch through the vibrant feed, free audio/video calls, and private or group chats.

This made in India app is developed by more than 1000 it professionals and it's available presently in eight languages such as Tamil, Telugu, Kannada, English. In the future, additional languages could be included.

Prime Minister Narendra Modi has been strongly advocating the message of 'Aatmanirbhar Bharat' (self-reliant India) and the launch of Elyments is seen as a massive step towards this direction. 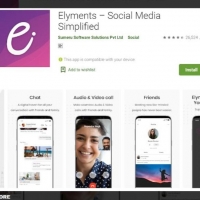